For a company only launched in 2017, SleepScore Labs is already making big waves in the consumer sleep technology world.

The 3-way collaboration between global leader in medical devices, Resmed, Dr Oz and Pegasus Capital combines decades of experience in the sleep industry to roll out an impressively ambitious range of new products, services and partnerships they hope will propel consumer sleep-tech into the mainstream.

SleepScore Max is their first hardware product, but in essence it’s a reboot of the popular ResMed S+ non-contact sleep monitor, (read our in-depth ResMed S+ review here) albeit with a radically improved software ‘advice engine’ that capitalizes on ResMed’s vast trove (more than 1.5 billion nights)  of sleep and breathing data. 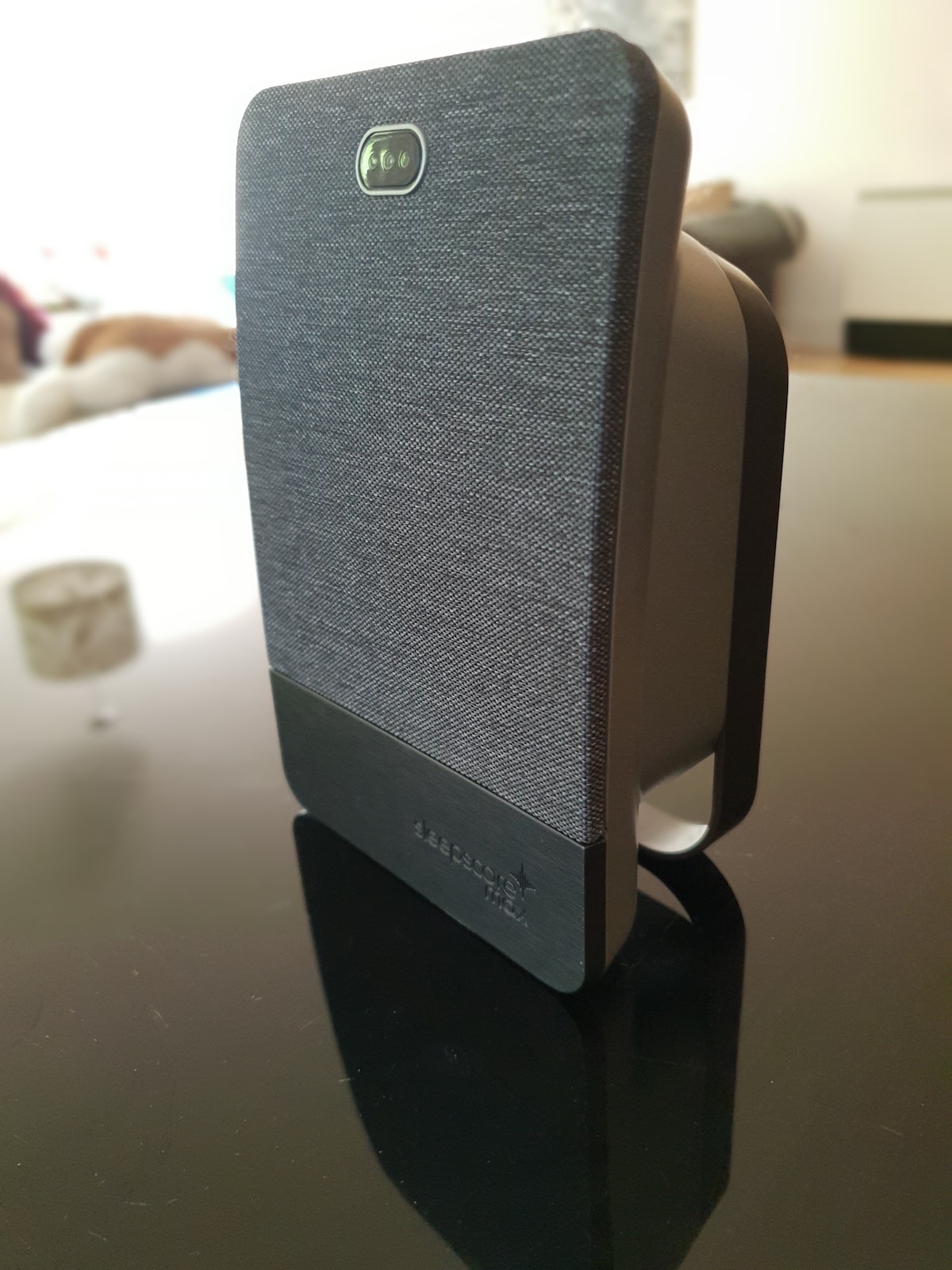 SleepScore Max is designed to blend into any sleep environment

Like its predecessor, SleepScore Max features a unique contactless bio-sensor which detects minute variations in your movement and breathing. Using a sophisticated proprietary algorithm, SleepScore Max can track your sleep with a high degree of accuracy, including determining your sleep stages (light sleep, deep sleep, REM).

How accurate is SleepScore Max?

SleepScore Labs stands out from the crowd in that a lot of effort has been undertaken to validated the efficacy of their sleep scoring technology. Several scientific papers have established that their non-contact sleep-sensor performs favourably compared to medical-grade polysomnography (PSG) – currently the ‘gold standard’ in measuring and monitoring sleep in the lab.

How does SleepScore Max work?

SleepScore Max is keen to distance itself from the idea of ‘passive’ sleep tracking ie merely recording your sleep data.

It calls itself a ‘sleep improvement system’ – one that offers science-based advice and recommendations to improve your sleep.

Whilst the hardware itself is responsible for collecting your sleep data, the analysis is made possible by the machine-learning capabilities of its software algorithms, facilitated by a smartphone app and a cloud-based web platform.

The device pairs with your phone via Bluetooth and then sits on your bedside table. Before you go bed, you are prompted to enter a few details about your day, such as diet, exercise, whether or not you’ve consumed caffeine or alcohol etc.

Then when you’re ready to sleep, you switch the device into sleep tracking mode and it begins to monitor your sleep.

Using low-energy radio waves SleepScore Max scans the body 16 times per second, allowing it to detect tiny variations in your movement down to just 1/10th of a millimetre. You can see a neat demonstration of how this technology works in a previous video we made when reviewing the ResMed S+.

Because of the high resolution and sensitivity of the bio-motion sensor, SleepScore’s algorithms are able to interpolate this data into a breakdown of your night’s sleep.

When you wake up, as well as being able to view a breakdown of your sleep cycles, you’re also presented with a score from 1 to 100 which represents your sleep quality during the night.

As well as detecting your movement, SleepScore Max also features environmental sensors which detect light, room temperature and noise in your bedroom.

If you had no idea what SleepScore Max was, you would probably guess it was some kind of wireless speaker, because of the fabric mesh covering the front of the device. 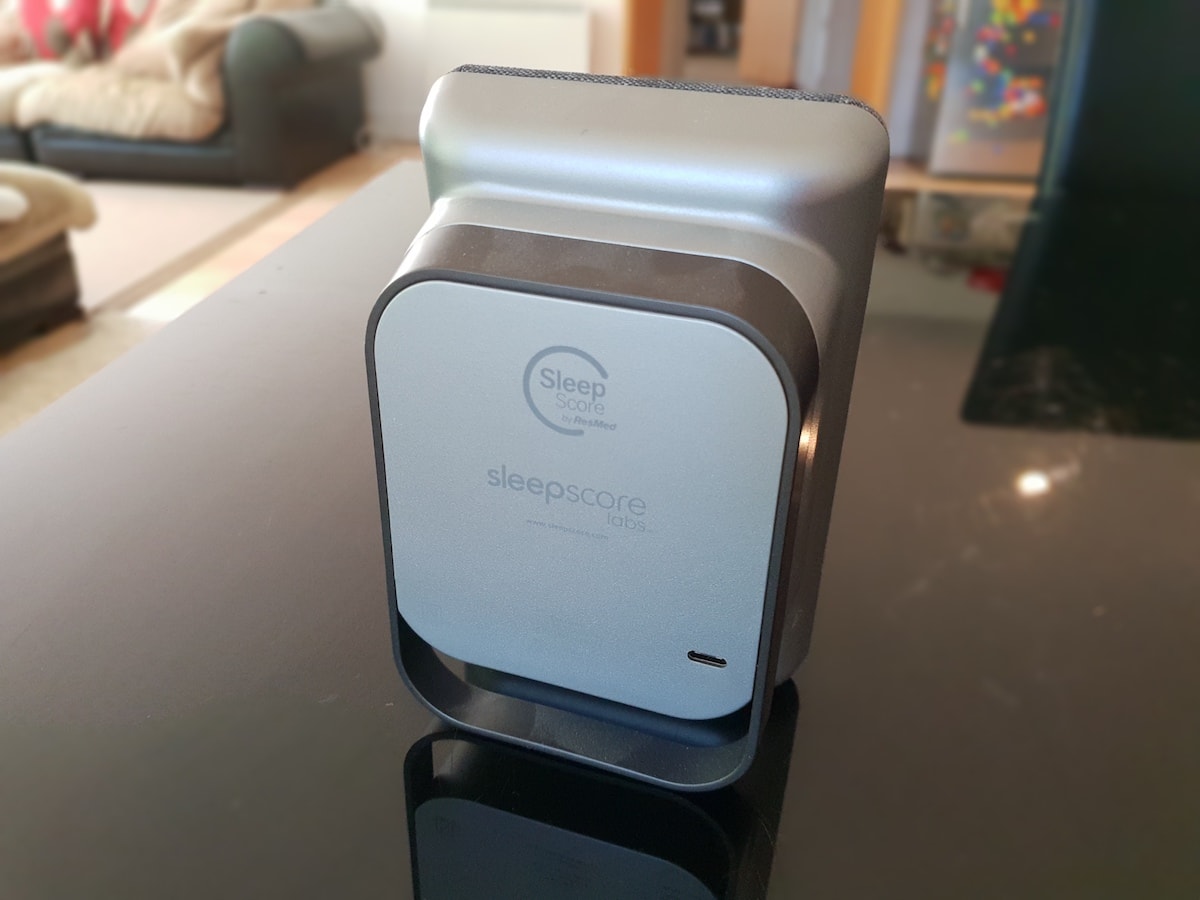 There are no buttons, switches or display (apart from the 3 led status lights) and in terms of connectivity, just a single Micro USB-B power socket at the rear.

The only giveaway to the sleep tracker’s true function is the SleepScore Max logo subtly etched at the front of the device.

About the same height and width as a large smartphone, and around 3 inches deep, the Max’s utilitarian looks are designed not to stand out and to blend into any bedroom environment.

In keeping with the minimally evasive contactless technology, the SleepScore Max hardware setup is a pretty simple, straightforward process.

For optimal results you place the device on your nightstand at least one metre away from your body. The Max also needs to be on a higher elevation than your body and pointed towards your chest torso area.

Unlike the previous incarnation the ResMed S+ which featured a swivelling unit to adjust the positioning of the sensor, the SleepScore Max is a fixed chunk of hardware with no moving parts – a design improvement in my opinion, as it’s one less thing to worry about. 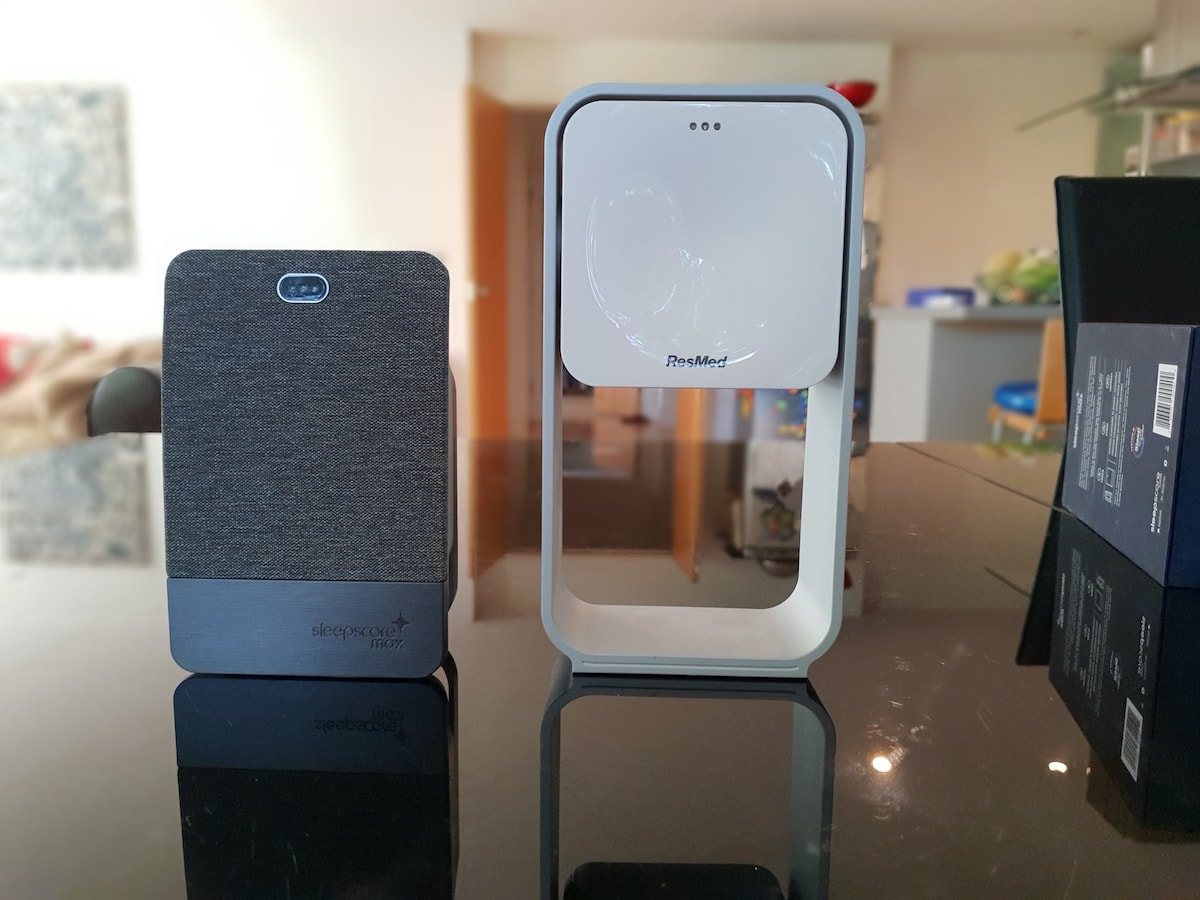 SleepScore Max alongside its predecessor the ResMed S+ sleep tracker

Once the SleepScore Max is in place, plug in the USB power socket and that’s pretty much it. Unless the Max gets knocked you’ll never have to physically touch the device again.

Setting up the app
Once you’ve downloaded and installed the SleepScore app you also need to register an account at SleepScore.com.

It’s here that the process becomes a little long-winded, in the sense that you’ll then be prompted to answer a series of questions about your personal sleep preferences and habits, including your caffeine habits, how much exercise you take and whether you currently experience any sleep problems.

In an age where we’re becoming increasingly aware of how much data we share, all these questions may seem a little intrusive, but there’s a good reason why they’re asked. The information is used to set a baseline for your SleepScore. The more data the algorithm gets, the more accurate it will be at giving you personalised feedback and recommendations to improve your sleep.

Once you’ve completed the initial setup, you’re good to go. The Max sits on your nightstand in standby mode, as indicated by a solid red LED. When the Max is paired by Bluetooth with your phone, the LED turns green indicating that the app is ready to start tracking your sleep. 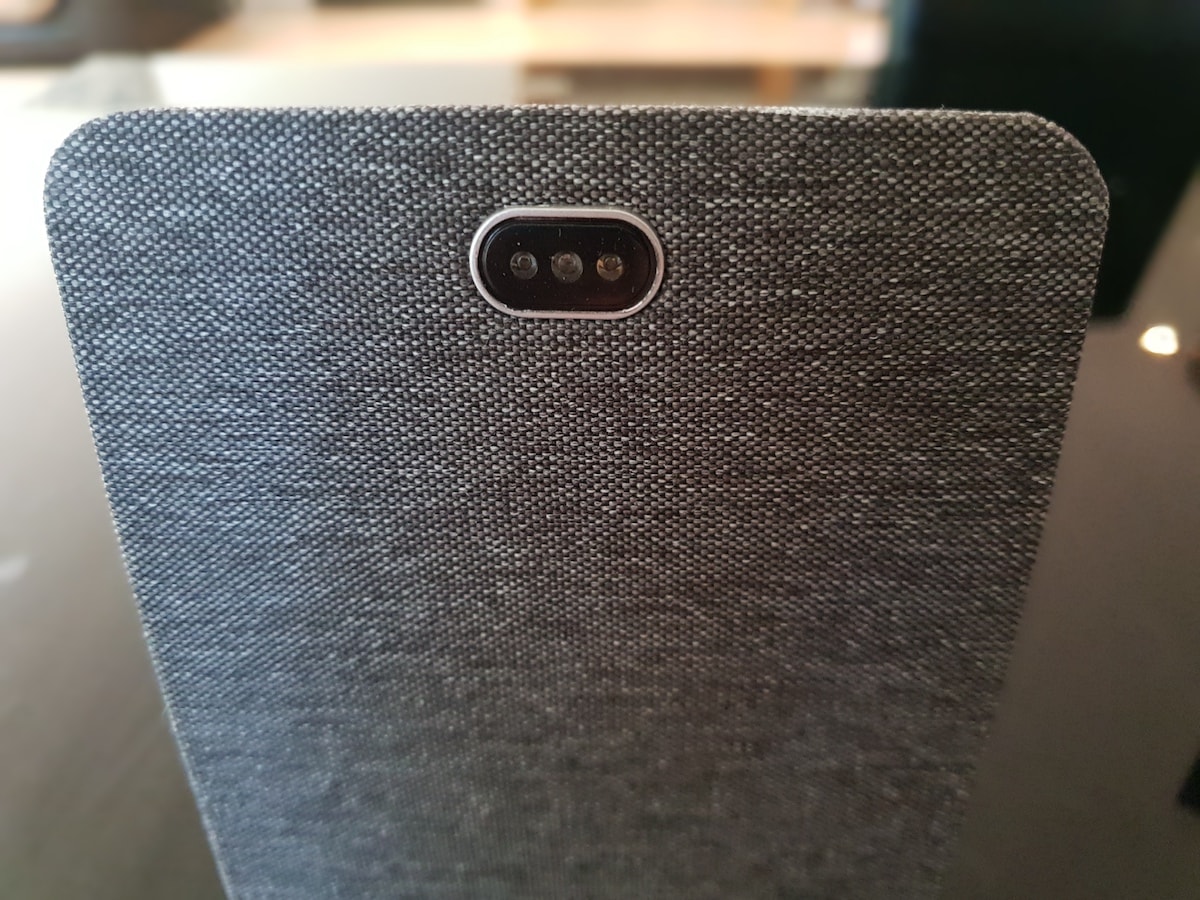 Probably the biggest gripe about the SleepScore Max is the lack of automatic sleep detection. Many sleep trackers, including most wearables, but also dedicated sleep monitors like Nokia Sleep and Emfit QS, are able to automatically detect when you’re in bed, or having a nap and will start measuring your sleep without you having to press any buttons.

Whilst this is not always foolproof (ie your FitBit could interpret a 2 hour NetFlix couch potato session as ‘sleep’ rather than awake), automatic sleep detection is an extremely useful feature -and it’s not just about convenience. People are much more likely to monitor their sleep data over the long term if their sleep tracker works invisibly in the background.

Perhaps one of the reasons SleepScore Max hasn’t yet implemented aut0-sleep tracking is that the SleepScore system, apart from the sleep tracker measurements, can incorporate many other factors into its scoring algorithm.

As it builds up a more detailed profile of your sleep habits, SleepScore can then feed this data back to you in the form of personalized suggestions for improving your sleep. So how does this work in practise?

Each night, before you switch on the SleepScore app to start tracking your sleep, you’ll be given the option to answer a series of short questions about your preceding daytime activities, ie how much coffee you drank, if you had any alcohol the night before etc.

Personally, I grew tired of having to input this information on a daily basis, as I’ve been observing my own sleep patterns for many years now but for some this extra information could be really useful.

For instance, all of us have differing sensitivities to stimulants and being able to cross-reference your caffeine intake with your sleep data could be invaluable to figuring out whether or not you should cut out that mid-afternoon cappuccino.

In addition, because the SleepScore Max app can breakdown your sleep stages, you can actually see how alcohol for example affects the amount of REM sleep you get.

All in all, the more data you put into the app, the more detailed feedback you’ll get about your own personal sleep habits.

One of the other unique features about the SleepScore app is the ability to produce a detailed report which aggregates your long term sleep data that you can share with your doctor or healthcare professional.

The report itself is extremely detailed, and gives a breakdown of your sleep performance over the last 31 nights. As well as your SleepScore, which is calculated by analyzing six different measures defined by the 2004 Ohayon study, one of the largest ever meta-analyses of adult sleep patterns, the report gives you separate breakdowns of lifestyle data – ie caffeine intake, alcohol consumption, minutes of exercise, self-reported stress, sleepiness – plus individual graphs detailing time in bed, sleep efficiency, sleep onset latency and more.

Overall, the report is a uniquely useful tool, not just to take to your doctor, but for equipping individuals with a very granular breakdown of your long term sleep trends.

SleepScore Max is one of the best consumer sleep trackers around at the moment. Its non-contact sensor gives you the freedom of not having to strap on a wearable to body at night.

But its real strength lies in the fact that the algorithms behind the hardware are the result of over 10 years of research and development at ResMed’s labs, coupled with the machine-learning feedback of millions of nights of sleep insights from the company’s vast archive of user data.

If you’re looking for a way to find out more about your sleep habits, and tips and techniques to improve on your sleep, SleepScore Max comes highly recommended.

Garmin beefs up its wearables with advanced sleep monitoring

In conversation with Colin Lawlor, CEO of SleepScore Labs