We spoke to Inteliclinic, about the Neuroon ‘intelligent sleep mask’ and its unique features

Update: Oct 2018 – After hearing numerous reports of customer complaints, lack of contact, and product quality issues, we can no longer support or condone anything to do with Neuroon any more.  Sadly, we feel, they have let the sleep technology industry down.

Starting out as a a Kickstarter project in 2013, Neuroon is part of a new wave of brain gadgets that promise to optimize your sleep and personal health.

Billed as an ‘intelligent’ sleep mask, Neuroon features a range of sensors that can measure your brainwaves, heart-rate and movement and other metrics and provide you with detailed feedback on your sleep patterns. Neuroon also features patented ‘light therapy programs that can help with jet lag and as a ‘biorhythm adjuster’.

As the Neuroon starts to ship out to its first customers, we chatted to Dagna Frydrych of Inteliclinic to find out more.

JM: Where did the idea for the Neuroon come from and what’s the background of the founders?

DF: Neuroon was developed by Janusz Frączek and Kamil Adamczyk. They met in 2012 when they were both students engaged in intercollegiate science projects. Janusz was coordinating a cybernetic team from Warsaw University of Technology and Kamil was supervising neurosurgery students at Warsaw Medical University.

The topic of their research was non-invasive brain monitoring. One of the areas Kamil and Janusz focussed on was sleep science. Their collaboration was so fruitful that after university they decided to continue working together.

They wanted to build a small and comfortable device that was comparable to medical polysomnogram and could potentially revolutionize the traditional sleep study. This is how the idea for the Neuroon was created.

JM: Originally the Neuroon was launched on Kickstarter to help with polyphasic sleep. Why did you decide to change the focus of the product?

DF: Thanks to the huge response via Kickstarter we were contacted by lots of scientists and doctors who wanted to cooperate with us and also gave us first suggestions about polyphasic sleep.

We also received a message from Dr. Christopher Drake, chairman of the National Sleep Foundation and a researcher at the Henry Ford Sleep Disorders and Research Center. Dr. Drake offered to be our advisor.

After hours of talks with scientists, business people, and other specialists we decided not to make polyphasic sleep feature the centre point of the product and transform the Neuroon into a universal sleeping companion and personal energy manager.

Hence the Neuroon project grew beyond sleep tracking to include pulse monitoring and light therapy. The core functionality of the device is achieving near medical-grade sleep measurements and helping people who work shifts, suffer jet lag, or have problems falling asleep.

JM: Shift working and irregular sleep schedules are a big problem. How does the Neuroon help with this?

DF: Neuroon has a special feature for users facing these problems. The Biorhythm Adjuster adjusts the user’s sleep cycles to irregular sleep schedules. The program adapts the user’s circadian clock to the changing sleep/wake times and irregular lifestyles often associated with shift work.

Neuroon also helps with falling asleep, which can be disturbed by the artificial blue light emitted by electronic devices. Based on the collected data from user’s forehead, the Neuroon mask creates a personalized Bright Light Therapy to improve the user’s sleep quality. The benefits of Bright Light Therapy were confirmed in a landmark study by Stanford University researchers in 2014.

JM: Other sleep tracking products claim to be able to calculate REM sleep via heart rate and respiration. What’s the major difference to this approach and using EEG data?

DF: Most of these products do not provide users with data and its analytics to such a high level that Neuroon does. Moreover, Neuroon is placed on the face, measuring EEG using 3 electrodes that touch the forehead.

Also, measuring EEG instead of only relying on heart rate (which Neuroon also provides) and respiration gives us huge potential for the future development of Neuroon’s functions.

For example we are currently preparing for clinical trials that will use the Neuroon’s EEG sensors to detect an upcoming epilepsy attack.

JM: There’s a lot of interest these days in lucid dreaming. Is this an area that the Neuroon can help out with?

DF: Yes, exactly. Our technical team have just started working on equipping the Neuroon with a feature that will help the user induce lucid dreaming but it will require some time to prepare it to the high level that would satisfy our customers.

Fortunately Neuroon is already well designed to do that thanks to the fact that it can precisely detect the REM phase which is crucial to inducing lucid dreaming. Hopefully soon we will have very good news for everybody interested in this area of sleep and dreaming.

JM: At the moment you can only use the Neuroon with the mobile app, however I believe there’s a web app and an API in the pipeline. With the increasing connected Internet of Things, can you envisage any future applications for Neuroon?

DF: We do have major plans regarding using our API and releasing a special version of Neuroon. Unfortunately we cannot reveal anything now but you can only imagine how many opportunities measuring brain waves can give us.

By integrating the mask with smart home devices we can build an automatic controller of different things, eg. when the Neuroon detects that we are woken up in the morning it can connect with your coffee machine and start preparing a fresh brew.

It could also integrate with lighting, music, and thermostat systems etc. The future belongs to Internet of Things and we believe that very soon, thanks to Neuroon’s API  our houses can be really intelligent and innovative. 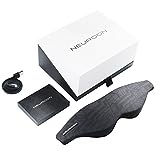 Garmin beefs up its wearables with advanced sleep monitoring

In conversation with Colin Lawlor, CEO of SleepScore Labs