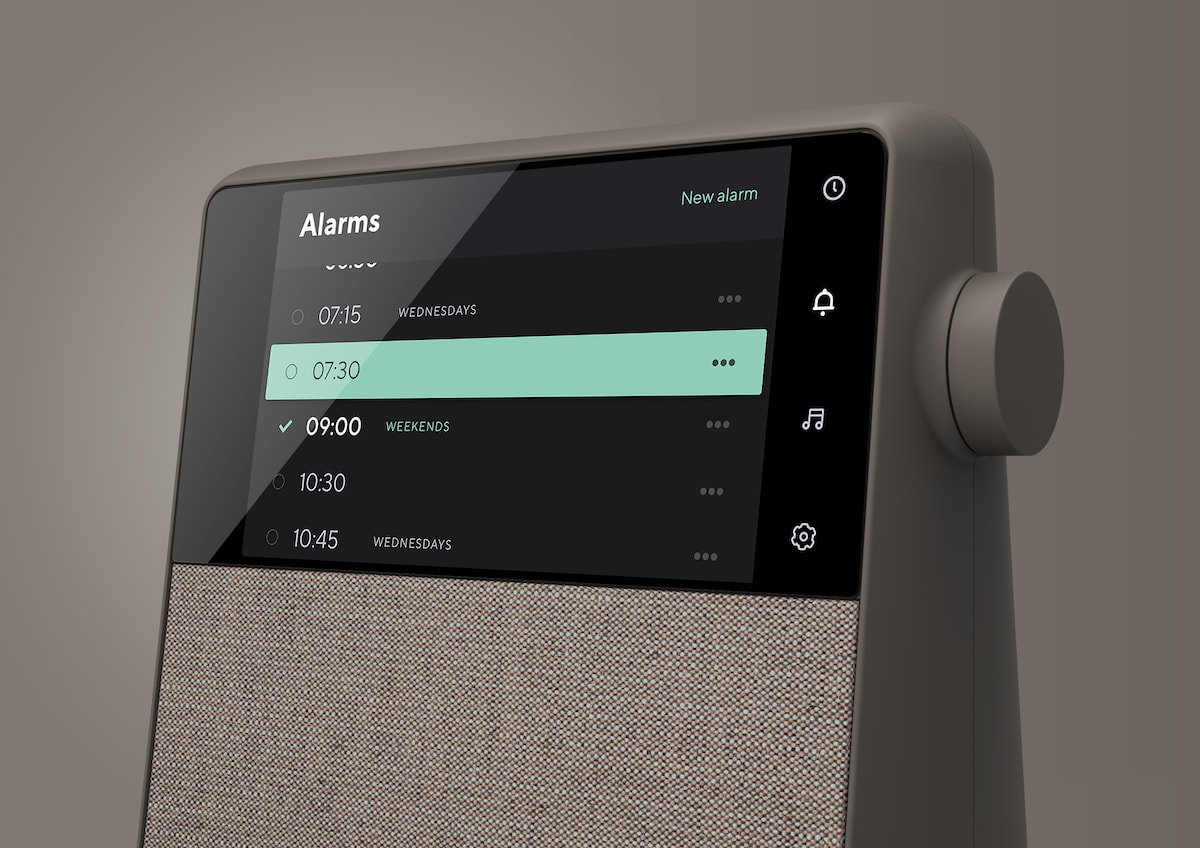 We talked to Daan Weijers from Circa – a smart, sleep-tracking alarm clock that not only helps you wake up, but also improves the way you sleep.

When Steve Jobs leapt onto a stage in 2007 to launch the iPhone, nobody could have predicted what was to become a technological revolution.

It’s unimaginable now to think of a world without smartphones, but as well as their myriad benefits, the addictive nature of our mobile devices has been blamed for a number of negative consequences – including ruining our sleep.

Now, a new company Circa has recognised how much our smartphones have become sleep stealers, and is on a mission to help us banish our phones from the bedroom – by reinventing the alarm clock.

Why are phones so bad for our sleep?

In order to establish healthy sleep habits, bedtime should allow our minds and bodies to gradually unwind, relax and drift naturally off to sleep.

But because so many of us take our phones to bed with us, often the opposite happens. Instead of emptying our minds, we end up scrolling our newsfeeds under the covers, answering emails and waiting for the next dopamine hit that accompanies each push notification.

Couple this with the melatonin-blocking effects of our blue-light-emitting phone screens and you’ve got a perfect recipe for a host of sleep problems.

The obvious solution is to leave the phone out of the bedroom in the first place. But this plan gets scuppered too as the majority of us now also use our phone as an alarm clock to help us wake up too.

Circa – the smart alarm clock that helps you sleep

Enter Circa, a stand-alone alarm clock that hopes to provide ‘a better alternative than waking up with your phone.’ The brainchild of a small team of designers and engineers based in the Netherlands, Circa recently surpassed its Kickstarter funding goal and is available for pre-order at IndieGogo. 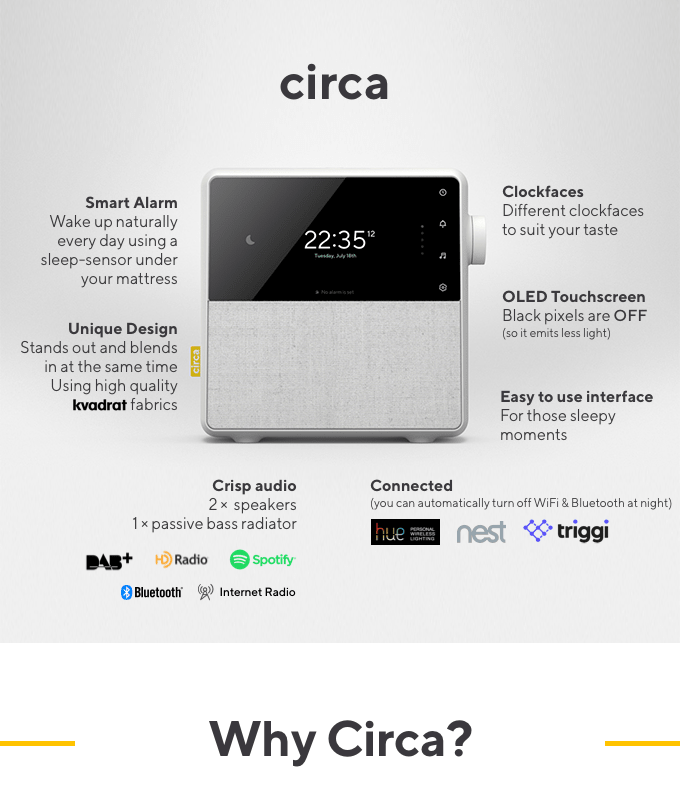 On the surface, launching a premium priced alarm clock (Circa will retail at around $249) when most of us use a free app to wake us up, seems a counterintuitive business move.

But to describe Circa as just an alarm clock is to do it a huge dis-service. Circa cleverly packs a lot of smart sleep technology into a single multi-functional device. Here’s a quick rundown of Circa’s main features;

Circa is undoubtably a high-end device but the team headed by Founder Hans Brouwer – a product developer with over 25 years of experience, wanted to design a hardware device that would last you a long time. As Interaction Designer Daan Weijers explained;

‘the thing is when you’re not using your phone you need to have all the technology on board which makes the product slightly more expensive so, yeah, we’re looking at the more premium market. But there’s a lot more under the hood. People buy white noise machines for 100 bucks or a digital radio for 150 or 200 bucks [but] these things are already built in.

You’re not going to a new alarm clock every two years so we put a lot of effort into the hardware, so it could be future proof. So, yeah, our goal is for people to have this alarm clock for at least  another five maybe ten years in their bedrooms.”

One of the reasons Circa can claim to be a smart alarm clock is its sleep-tracking capabilities. Using the onboard USB port you can attach a sensor which comes as an optional extra when you buy the device. The sensor is essentially the same type technology used by several sleep technology companies like Beddit and Withings (now Nokia Health).

The sensor is a long, thin strip of piezo-electric material covered by fabric. It goes underneath your mattress and using a technique known as ballistocardiography it in effect ‘listens’ for your body motion and breathing patterns, translating this movement into electrical impulses which in turn is converted into your sleep data metrics.

Unlike other sleep technology firms, Circa have taken a different approach to how they present users with their sleep stats. There’s no companion smartphone app with Circa, your sleep data is currently only available via the alarm clock itself. Neither do you get a nightly ‘sleep score’ telling you how many points out of 100 your previous night’s sleep rated as. As Daan Weijers explained,

“one thing you see a lot with the whole quanitified self movement thing is that people collect a ton of data about themselves but then what? So if you use something like Beddit or Sleep Cycle you’d get [for instance] an 85% sleep score from last night and then you’re like, “Okay,” and now?

We’re focusing more on the long-term insights, like, your sleeping routine, your habits, when do you wake up, when do you go to bed – over a longer period time.

And, I guess, in that sense [we’re] more unique compared to the others out there because then looking at that longer term we can, we provide you with a little bit of insight.

So, if you want to go to bed earlier, we can send you a notification on your phone. If you want to wake up earlier, we’re going to slowly wake you up earlier over the course of few weeks. So, more of that actionable feedback rather than that individual night because everyone has a bad night once in a while.”

This focus on a more holistic, long term view of your sleep health means Circa doesn’t currently provide the same sort of granular metrics – ie sleep cycles, heart-rate measurement – that other sleep trackers offer, instead Circa’s sleep tracking is more about aggregating your sleep data into a longer time window.

That’s not to say the device isn’t capable of detecting sleep stages. In fact this is how the built-in smart alarm works. Once you set your alarm, Circa will find the best time to wake you up within a 30 minutes of your alarm time, according to when the sensor detects you are in a light sleep phase. This helps you to wake in an easier and more gentle fashion, and avoids the problem of ‘sleep inertia’ the groggy effect you get when you are woken up whilst you’re in deep sleep.

Whether it’s your social media activity, GPS tracking os your shopping habits, one of the big concerns about our increasingly information-driven society is having control over our own personal data.

Circa is very much aware of this fact and has taken a very different approach to many health/sleep tracking companies. Because big data has been described as the new oil, many companies view their products’ data-collection capabilities as paramount to the commercial success. A recent startup, SleepScore Labs, for instance, prides themselves on having “the largest collection of at-home sleep data on the planet.”

Whilst undoubtably big data can provide unprecented insights, it’s not without its costs. And one of those is the concern over who owns our personal data and what control do we as individual have over it. Circa addresses this in a unique way. Currently your data never leaves the bedroom. Instead of being uploaded to cloud servers, your sleep data is recorded on the device itself via on-board flash storage.

“So, we wanted Circa to be a little bit conscientious about privacy as well…..so the Amazon Echo Spot, (an Alexa-enabled smart alarm clock) which was released a few months [brings] a microphone, and camera inside your bedroom. We said “nah, let’s not do that,” [because] we wanted to make sure that everything is secure on the device itself. So, for the first iteration of the product we’re looking into keeping it on the device itself and not even giving an option to share it [however] we do get a quite a few requests on Kickstarter about sharing [data] with Health Kit and with other third parties but for now, we keep it on the device itself.”

Circa is an interesting and innovative sleep technology product. Its focus on high-end design, multi-functionality and future proofing via firmware and software updates means it could offer a lot of benefits for sleep-tech fans who just can’t give up their smartphone addiction.